Otto Bachmann has been building sleds for 30 years. His luges had a cult following in high performance sports. Nowadays he supplies hobby sportsmen and families. His trademark? Lemon-yellow skids!

I push myself forward with my hands, first I head straight on and accelerate, then I turn right. I blink as the sun is reflected in the show and the wind blows in my face. Only a few more corners to turn before my sled slowly enters the valley station of the ski resort Helm. Otto Bachmann, sled maker and once one of the best natural run lugers in the world is already waiting for me there. He greets me with a smile, then his eyes follow the yellow skids that are so familiar to him. Of course he recognises them right away, after all they are the trademark of his sleds. Together we drive to the place where it all began – the same place he still builds his sleds with fast skids today.
It’s only a few kilometers to get from the ski resort Helm to where Otto lives. A narrow path leads us his house, which looks like it is snuggled up against a mountainside. The foyer is filled with many trophies, that from their shelves silently tell stories of days past, when Otto was a successful luger…

It takes Otto Bachmann 1,5 h to build a classic sled for hobby riders. It can take up to a few days to build a professional luge. 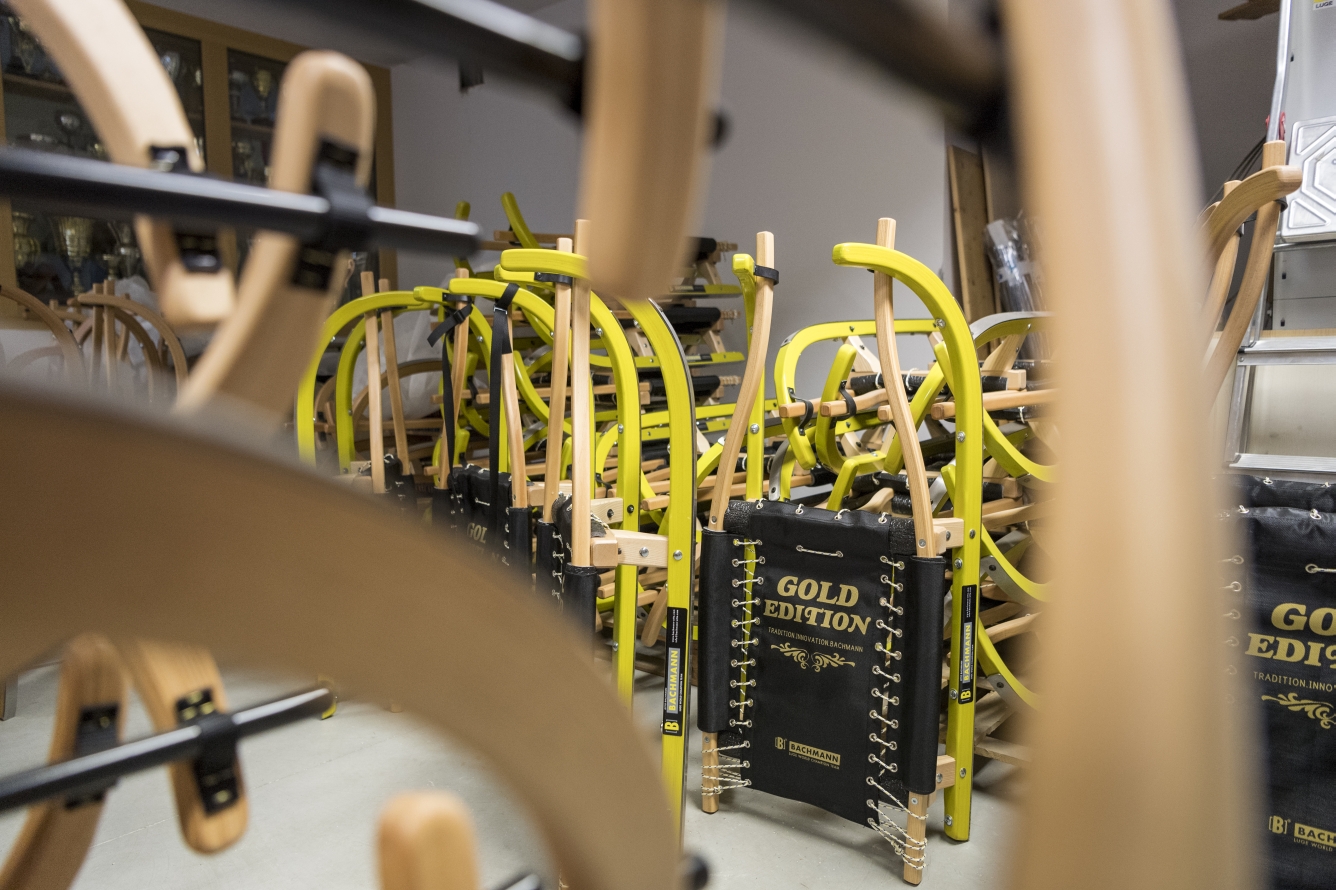 From zero to hero

It all started with a competitive race that took place behind Otto’s house. Otto participated in it when he was a child. He was very talented and was back in the village a lot faster than the other kids. That is how he caught the attention of the sledding association of Innichen/San Candido. He first made it to the national youth team and was later recruited by the national team. Otto did not want to and also could not only to live off being a luger. So he started – and shortly after – ended a cooking apprenticeship. He then took on a job at a shipping company. The times he had to work there perfectly matched his training and racing times in the weekend. His luges were mostly imported from Austria, but it wasn’t too long before the two time European champion dreamed of making them himself. He was 25 years old when he finally turned his passion into his profession.

Otto revolutionized the sled and was always one step ahead of all the other manufacturers. He stopped using the classic straps for the seating area and experimented with canvas and heavy goods vehicle tarps. He also used high-quality woods. It may sound self-evident today, but it was brand new forward thinking back in the day. A concerned neighbouring farmer one day asked Otto if he had enough work coming in, Otto just smiled and nodded. The farmer remained sceptical: “You’re making the sleds way too sturdy. They will last a lifetime!”, but again, Otto just answered with a smirk.

After only a short period of time Otto was already supplying almost 90% of the world’s best lugers. Among his clients were the Austrians Gerhard Pilz and Irene Koch. They loved their lemon-yellow sleds. At age 29, post World Championship 1986, he retired as a professional luger to focus full time on building his sleds.

The wood for the sleds is handled on-site in Otto Bachmann’s workshop in San Candido. 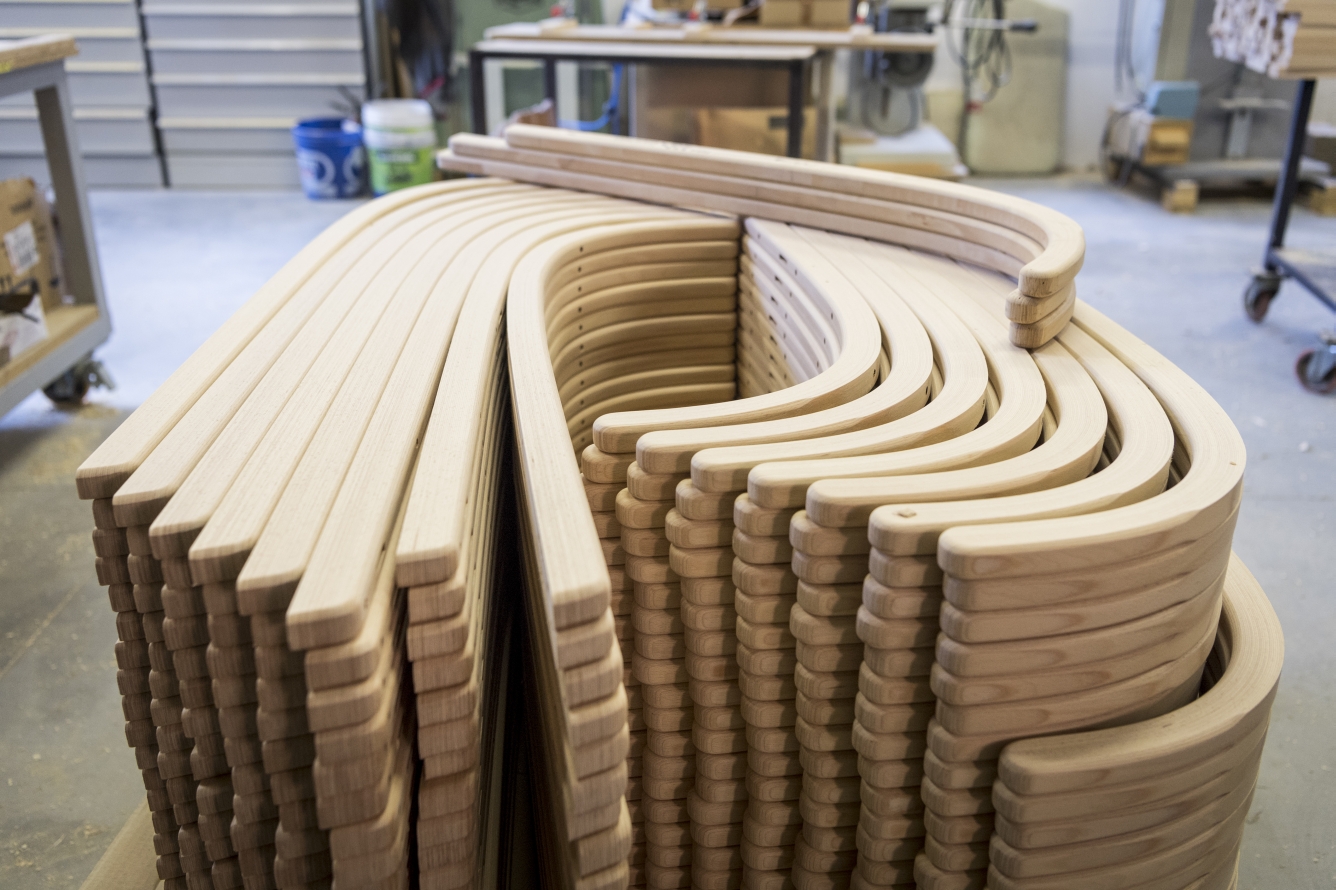 Otto leads me into his workshop. He has four people working for him. The first thing I see are countless sleds neatly stacked one next to the other. There’s wood shavings on the floor and miscellaneous pieces of wood are stacked to form a pile… Otto wistfully looks at the scene in front of him. He stopped producing the world cup luges over ten years ago. “They kept building those sleds more and more ambitiously, with skids as sharp as knives and suitable for ice slopes. A sled can be sportive, but I want to be able to use it on any normal leisure slope”, with this Otto expresses his doubts in the direction the luger trend is heading. By now he mainly provides recreational athletes and families.

Our conversation ends in front of Otto’s workshop. I sit on the lemon-yellow sled for one last time – this time, Otto joins me. He gives us a few strong pushes forward and away we go, dashing down the path behind his house. He breaks shortly before we sled onto a crossover and I fall into the snow. We both laugh out loud. Many years may have passed, but Otto’s passion for the sport is still very real and almost tangible.

In friendly collaboration with the storytelling platform “Stories from South Tyrol” of IDM South Tyrol. Editors, photographers and movie makers collect and recount real stories of people, products and lifestyles in South Tyrol.