Push to the limit, then… surpass it. Savour the taste of the conquest by reaching the summit of the giants of the earth and, in any case, be aware that the feat is only considered accomplished once you get back, safe and sound, at the foot of majestic, fascinating and cruel mountains that challenge the sky. And then the failure, the tragedies

and the long road you take to learn to live with them. The graphic novel by Michele Petrucci, Messner – the mountain, the void, the phoenix, published by Coconino Press-Fandango, is a successful mosaic of watercolours built on flashbacks and flashforwards, which resemble the personal story of Reinhold Messner, legendary figure of mountaineering, traced through eighty-eight excellent vignettes.

“I did not really know the scope of Reinhold’s accomplishments, but when I saw Werner Herzog’s Gasherbrum documentary, I was literally overwhelmed by his vision. A philosophy of life that I find more akin to an artist than a sportsman. The courage to dare, the audacity to offer himself up for continuous critique, the exposure, are indispensable elements for every creator”. Petrucci tells about the genesis of his work, completed in three years. “Messner and I met twice, and we had a good level of cooperation. He appreciated my drawings and gave me some tips on how I could tell the story.” Messner, for his part, confirms: “I did not know about comics. In Funes, where I

grew up, they did not get here. We received mail once a week – he reveals with a smile. – When I was informed about Michele’s project, I confess I was very sceptical. However, I also agreed to meet him. It took me just a few minutes to understand that I was facing a serious professional. At that point, I could no longer say no and I urged him to work freely. After all, he is the artist and he deserved to tell my life in his own way.“ The chronicle of the famous South Tyrolean climber is divided into three parts: from the conquest of the so-called fourteen 8-thousands- the highest mountains on the planet – climbed to completion without the aid of oxygen and mechanical means – crossing the icy lands of the South Pole and the dunes of the Gobi Desert, to the encounter with Tschemo, the legendary Yeti of the legends. The first part, called The Mountain, revolves around the tragic 1970 expedition on the Nanga Parbat, where Günther Messner, brother of Reinhold, died, overwhelmed by an avalanche. This event, of which is a large part of the initial chapter of the (bio)graphic novel, would mark the life of the 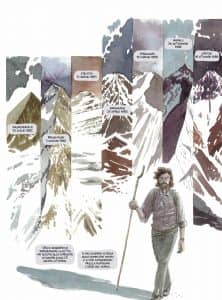 mountaineer both physically and emotionally. “The longest part is the one dedicated to the mountain. It seemed to me important to recount two great Messner defeats such as the Nanga Parbat and the failed expedition to the North Pole; they were defeats that taught him a lot and forced him to make decisive choices. In the case of Nanga Parbat, it was to continue with mountaineering despite everything and everyone, to make it become his life.
“THIS BOOK WAS A DOUBLE CHALLENGE”
Which of his challenges has attracted me more? Being a lover of walking, I prefer the Gobi Crossover, that he completed at 60 years old! But maybe the most fascinating was that of the South Pole, in the footsteps of the great adventurers, which I imagined wandering as ghosts in that desolate and windy land, “the comic artist reveals. The author of Fano, collaborator of newspapers Il Manifesto and La Corriere della Sera, experiments with a hybrid narrative style, which makes a series of calculated temporal jumps his basis. “This book was a

double challenge,” he points out. – It was not just the first biography I was working on, but also a difficult and delicate story because I had to keep the multitude of Messner’s writings in mind. I tried to be very rigorous with the text, so that the temporal shifts seemed to me an effective way to keep narrative tension high.“ This is a complex work of Petrucci, not devoid of excursions into the imagination between hallucinations, ghosts, dreams and visions. “The mountain represents the wild nature that Herzog defines as incomplete, created by God with anger. Moreover, Messner agrees that high altitudes are dangerous places where only fools and dreamers go. The mountain touches the sky: it is natural that mythology that is so stratified and geographically complex was created through the millennia.“ Petrucci, who is currently devoting himself to the creation of a comic novel on the French Revolution, ultimately paints a faithful portrayal of Messner’s legend; a concrete snapshot like the expert hand of a rock climber lying on the stone trying to feel the essence of the nude mountain. An exciting challenge. A lethal temptress…