Curves and hairpin turns, climbs and switchbacks at dizzying heights wind their way through the alpine landscape of South Tyrol. Here, crossing the mountain passes means discovering natural beauty, as well as the cultural and historical attractions that offer an authentic experience. 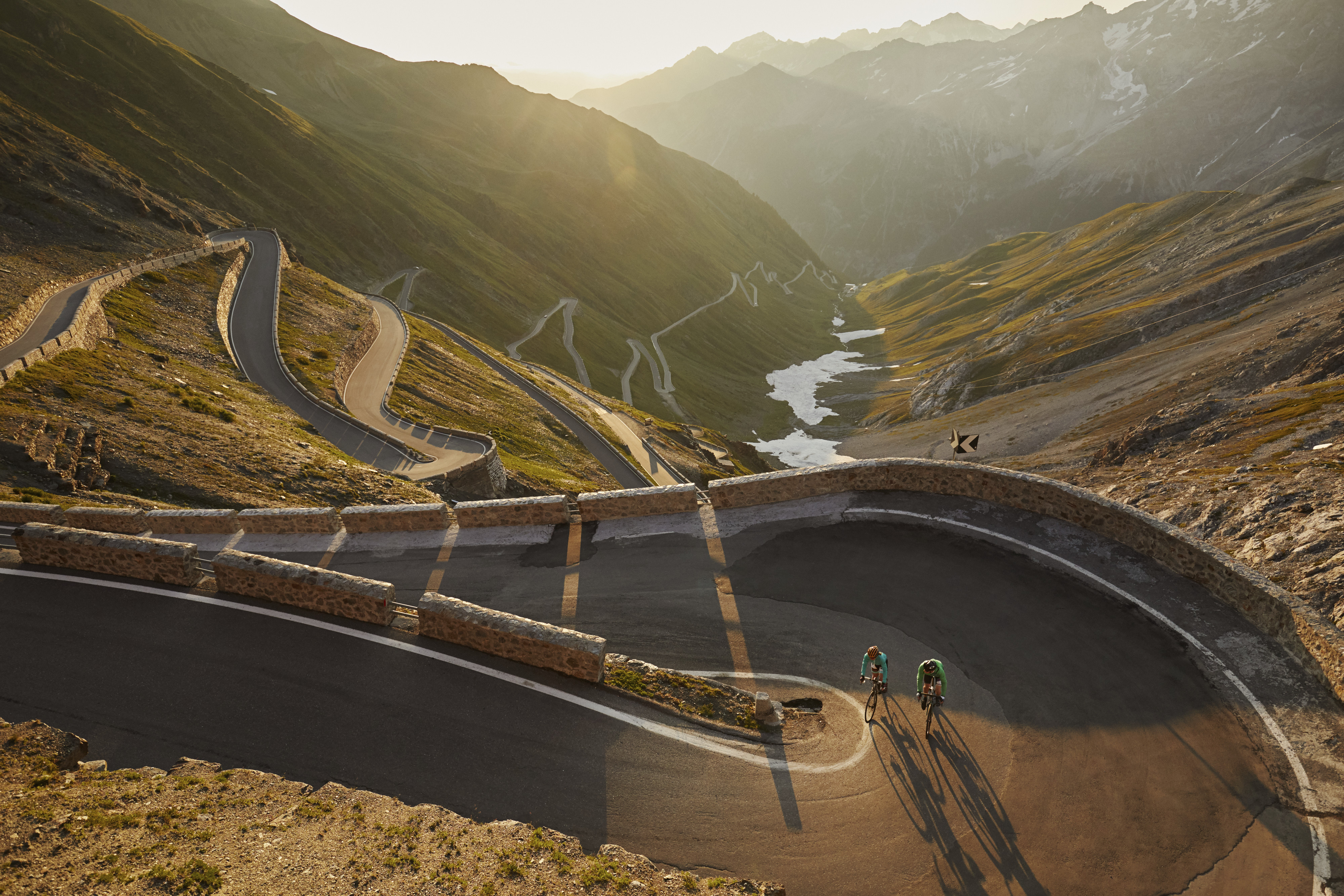 An endurance test on your bike: 48 hairpin bends lead up to the 2758 m altitude of the pass.

The Stelvio pass, in the Ortles area, is the highest pass in Italy (2758 m). Considered the “queen of mountain roads”, this pass was built in record time, between 1820 and 1825. Since then, the route of about 50 km has remained unchanged and has 87 hairpin turns: 48 from Prato to the summit and 39 downhill to Bormio, in the province of Sondrio. It is no coincidence that this extremely demanding itinerary, immersed in the Stelvio National Park, is also known as the “queen” stage of the Giro d’Italia. In addition, the panorama that opens onto the Ortles massif and the Gran Zebrù is nothing short of spectacular. North of Stelvio, there is the Cima Garibaldi or peak Tre Lingue (three languages), because here – on the border between Lombardy, South Tyrol and the Swiss canton of Grisons – three different languages meet: Italian, German and Romansh. During the First World War, the pass went through the front lines and, even today, you can find remains of the fortifications and some war relics. An exciting dive into the past for history buffs. 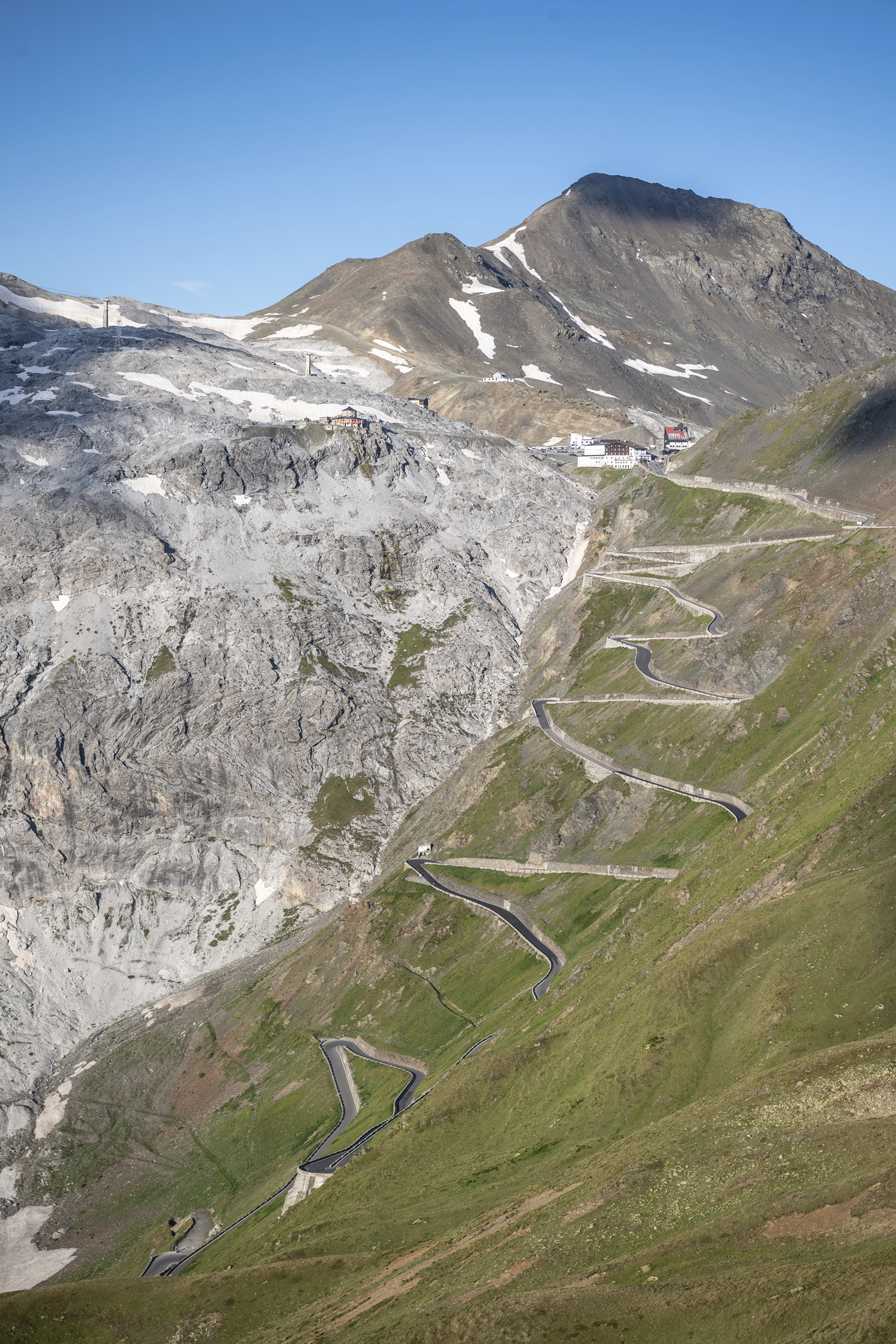 The road winds its way through the mountain landscape.

Rombo Pass – The gateway to the South 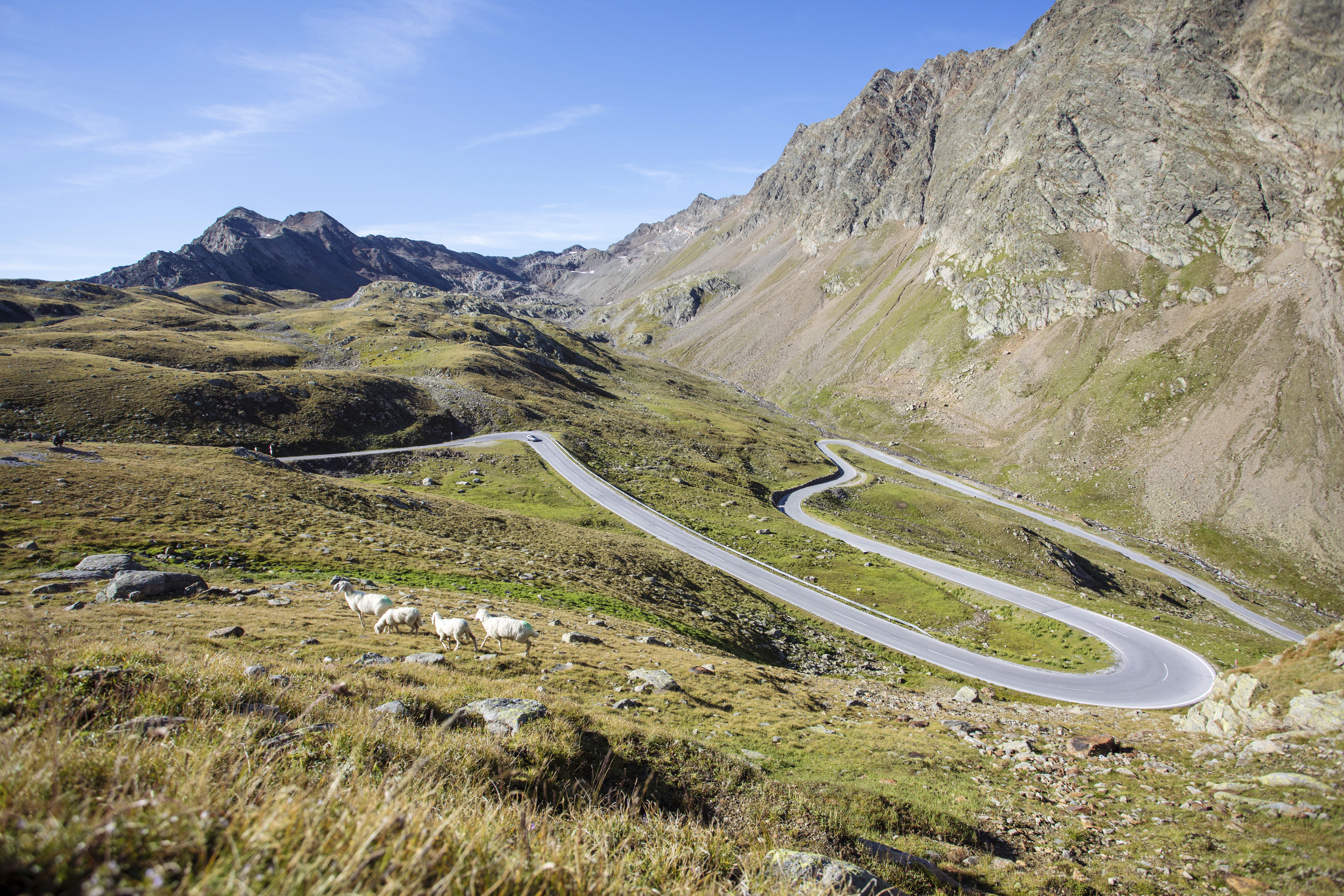 Sinuous twists and turns cross the alpine territory of the Rombo Pass.

The Rombo pass winds for 30 km on 44 hairpin turns that lead to the highest non-glacial pass (2509 m), between the Resia and Brenner passes. The route runs between Sölden, in the Austrian Ötztal valley, and San Leonardo in Passiria, in the South Tyrolean valley of the same name, partly crossing the Gruppo di Tessa nature park. Along the alpine road, there are some extraordinary architectural sculptures and a museum dedicated to the pass that protrudes from the slope like an erratic boulder. The museum offers information on the history, culture, society and economy of the region, through interviews with contemporary subjects and photography. Here, nature itself invites you to stop and contemplate the landscape of majestic peaks of over 3000 m, fields of snow that glisten in the sun until late summer and verdant alpine pastures. Finally, along the way, you can also see sheep, goats and ibex. So, slow down and enjoy the show! 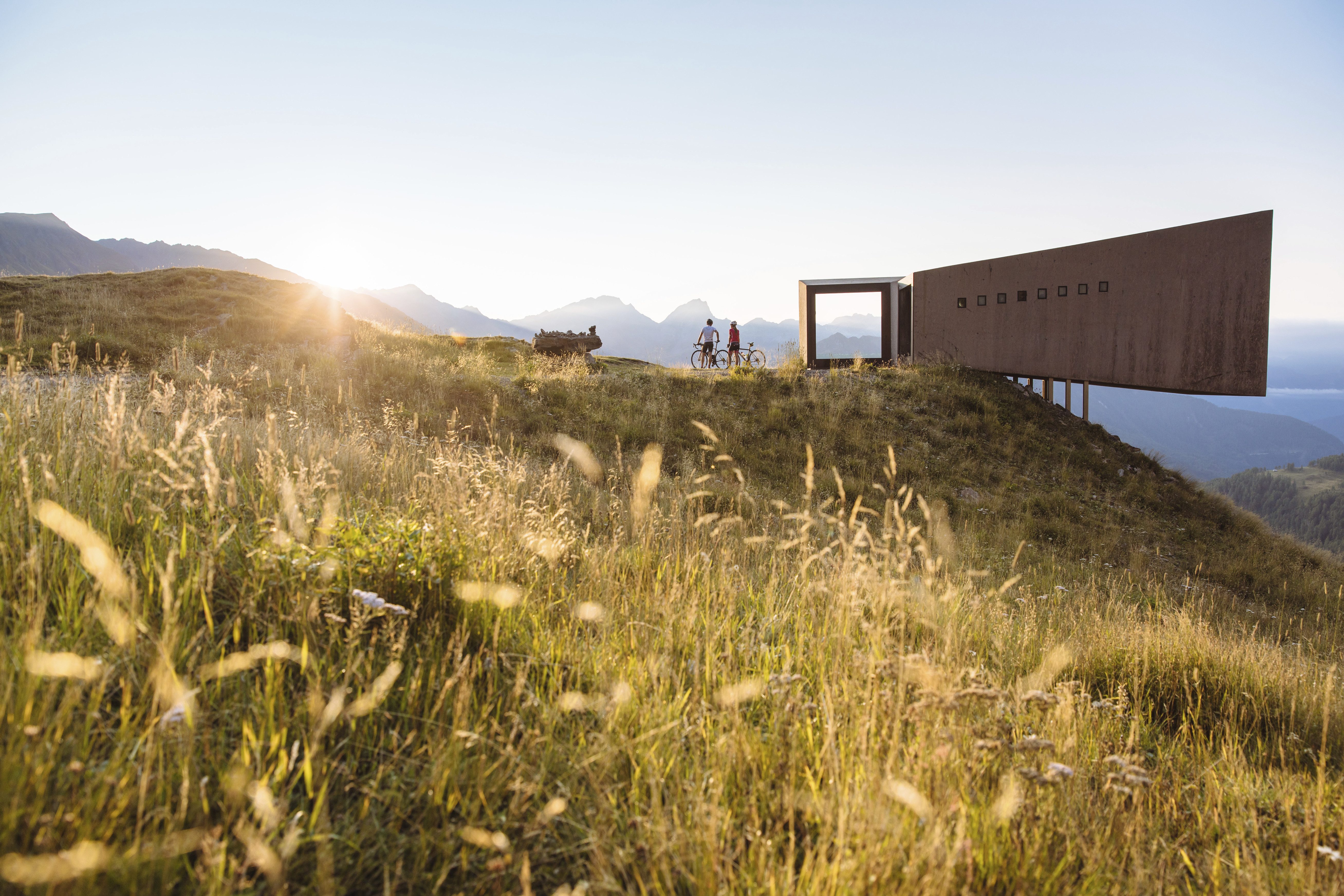 A telescope in the landscape: a panoramic stop on the Rombo Pass.

Sellaronda – The tour of the Dolomites 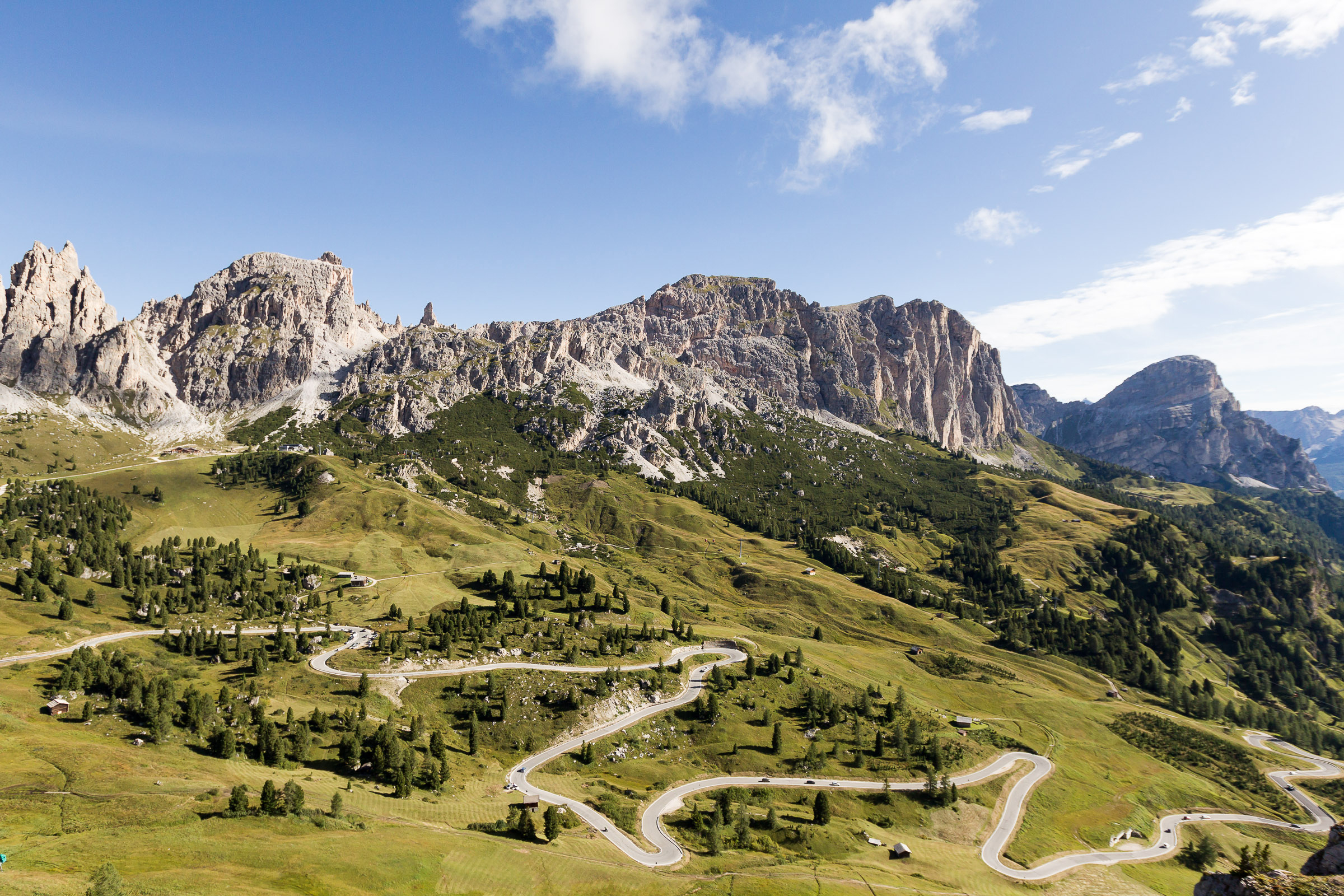 The Sellaronda is a true classic in the heart of the Dolomites, which winds along the four passes on the Sella massif. The tour starts from Selva di Val Gardena in a counter-clockwise direction and, after long curves and tortuous hairpin turns, arrives at the Sella pass (2218 m) which connects Val Gardena with Val di Fassa in Trentino. Then, continue in the direction of Pordoi (2239 m), where you can enjoy a breath-taking view of the Sassolungo Group, the Sella massif and the Marmolada. A tip: once you reach the Pordoi pass, take the cable car up to the summit of the same name (2950 m) in a few minutes, and admire the view from the mountain station. Once back in the valley, the path continues downhill towards Arabba, and then climbs up to the Campolongo pass (1875 m) and, more sinuously, to the Gardena pass (2121 m). From here, the Cir Group in the Puez-Odle Natural Park, the Dolomite peaks of Val Badia and the Sella massif are nothing short of wonderful. Finally, the road that leads back to the starting point is nearly all downhill. You can complete the Sellaronda by car in just under 2 hours; by motorcycle, the travel time is even shorter. Adequately trained cyclists can complete the tour in about 5 hours. 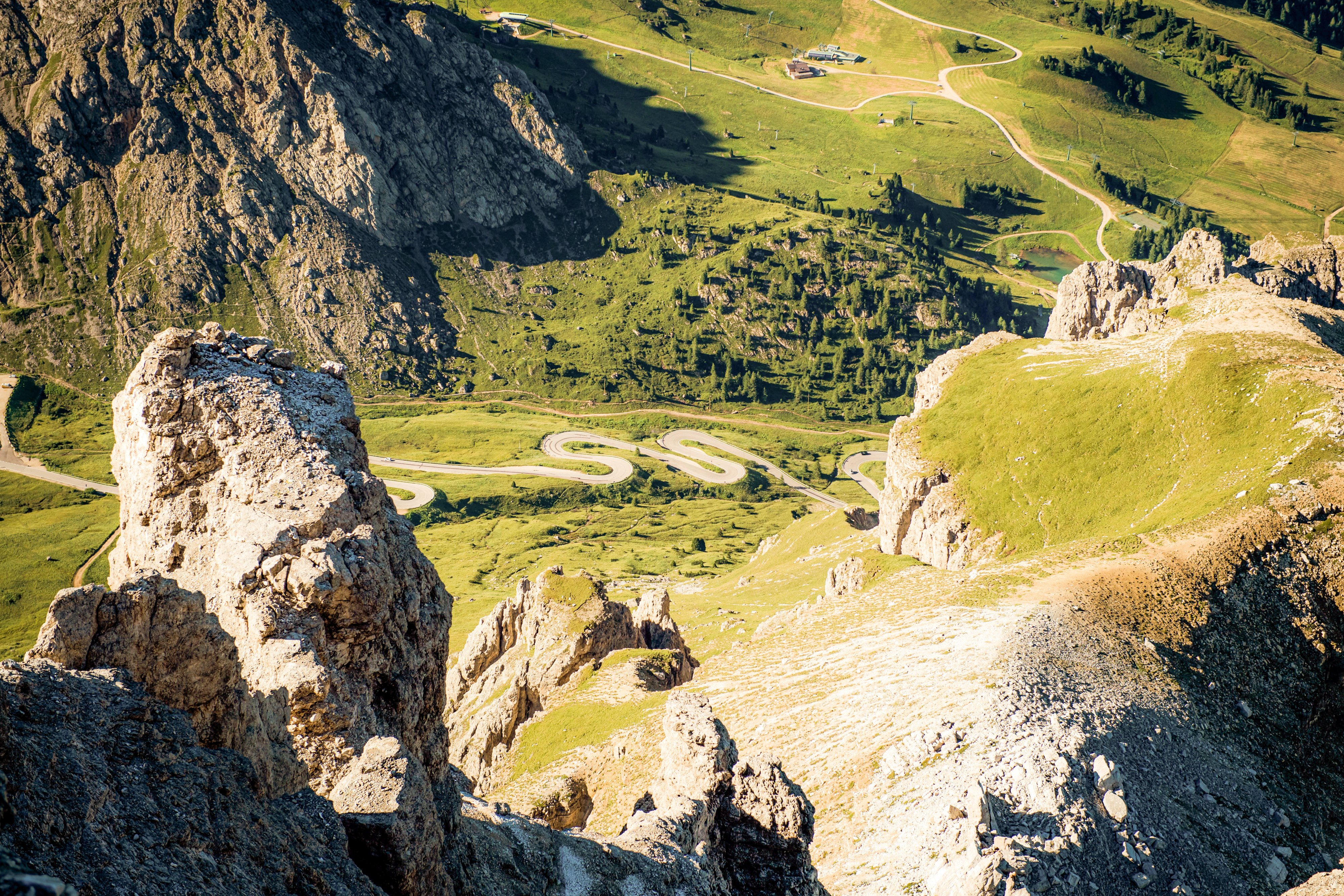 The Sellaronda from above.

Heading to the Giovo Pass along roads of pure enchantment.

Numerous archaeological finds prove that the Giovo Pass was an important traffic route even in the Stone Age. However, the road practiced today with the 31 switchbacks dates back to the period preceding the beginning of the First World War. The Giovo panoramic route (2094 m) connects Val Passiria, from San Leonardo, to the Alta Valle Isarco, to Vipiteno. This is considered the shortest connection between the beautiful Merano and the city of Vipiteno. Looking north are the majestic Ötztal Alps; to the south, the extensive Sarentine Alps. The Punta di Monte Giovo (2483 m), Cima Saxner (2359 m) and the wide Valle di Racines surround the pass. The trip offers a splendid view of the Cima Altissima (3480 m), with its glaciers to the south and the Tux Alps to the north. Finally, the centenary road of the pass runs alongside the medieval Castel Giovo, with pine forests and alpine pastures … you won’t be able to take your eyes off the beauty of the mountains.