The relationship between humans and their animals can tell you a lot about a culture. You could almost go as far as saying a culture depends on its contact to animals. In the old days even more than today, of course. This was also the case in South Tyrol. Society was mainly made up of farmers for centuries, and taking care of your land and animals was what secured your living. The tight bond with farm animals is still present today – and maybe even stronger than it has ever been. Cellina von Mannstein of the Forst brewery in Lagundo is sure of this. She pours her heart and soul into the family business and is also a well known animal lover. Photographed by star photographer Paul Croes, the ad campaign “South Tyrol. A place of origin that unites” shows how people, land and animals are connected in everyday life. A studio was built in the Forst brewery especially for this photo shoot. You can marvel at the results in the following pages. 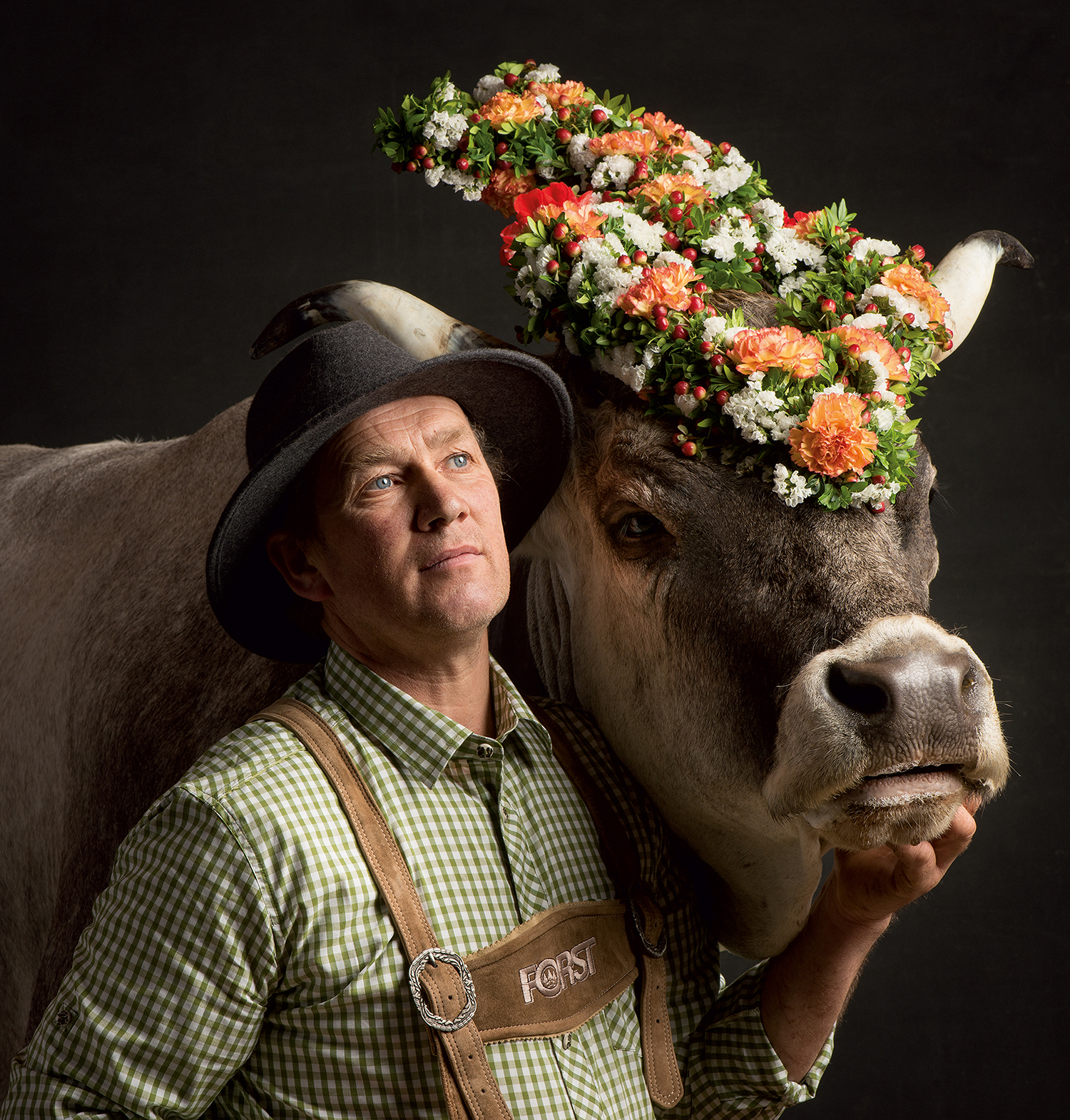 A summer without any accidents on the mountain pastures is not a matter of course. That is the reason farmers decorate their cows when they are lead back down to the farms in the fall. Various elaborate crowns and garlands made of grass, twigs, and flowers are placed on the animals’ heads for the alpine transhumance. Just like in this picture. Paul Pixner, Tyrolean Grey breeder from San Martino in Passiria attaches great importance to this tradition. After a long day he turns back home at the Hinterbruggerhof, where he even treats himself to a crown… of foam on his beer. 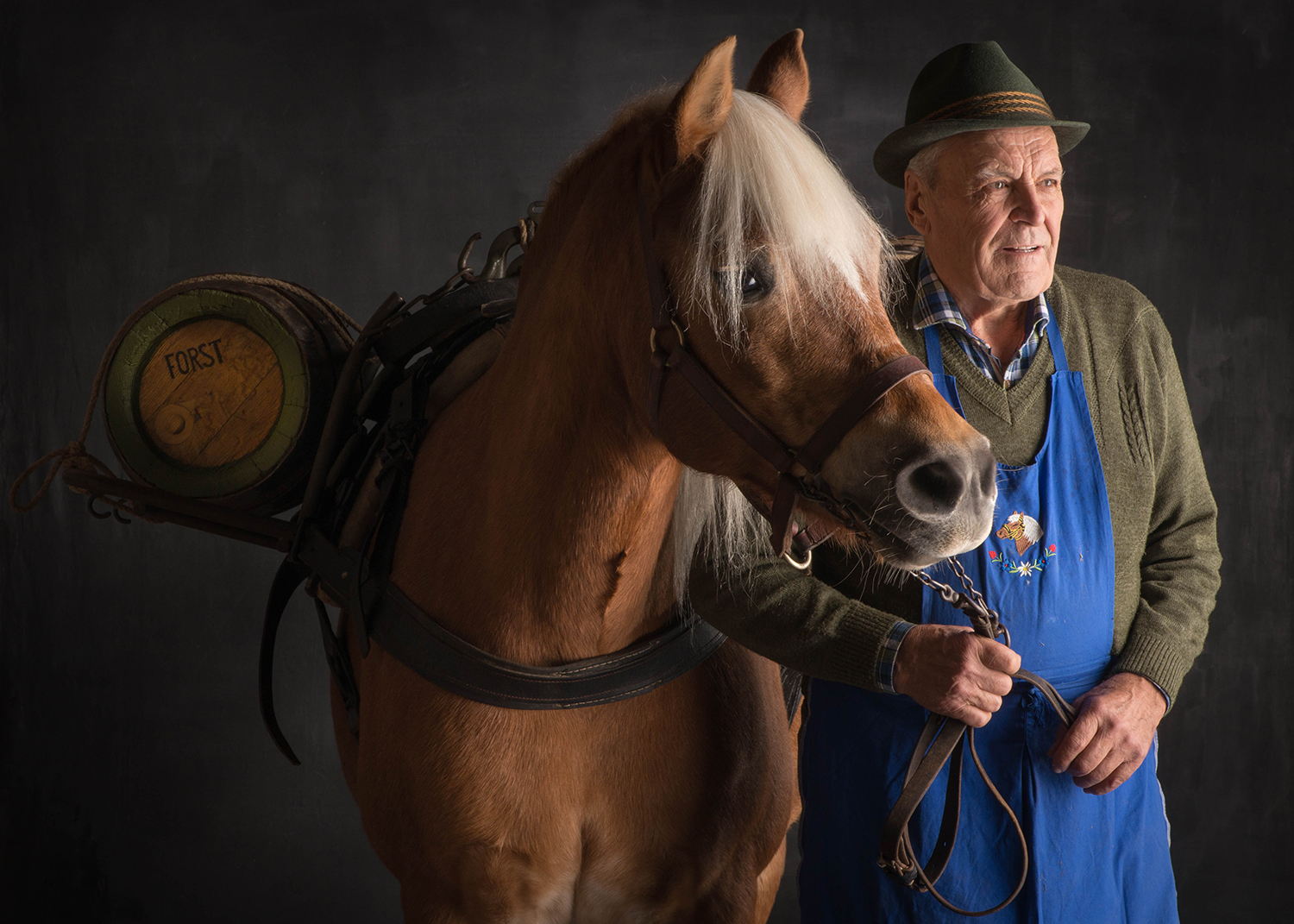 The Haflinger breed used to be a pure work hose. Next to no farmer ever had the idea to sit on the saddle of one just for fun. The demand for these small, sound standing and agile horses was huge in all of South Tyrol. It was mainly the farmers and traders from Monzoccolo and Avelengo (“Hafling”) that bought these horses, so that in time the name of the breed was changed to “Haflinger” through word of mouth. Back in the day, Josef Gögele (pictured) drove the parade float for the Forst brewery. He transported the big traditional barrel. It was always pulled by his “strong blonds”. They were rewarded with carrots when their job was done, and Josef still treates himself to a “cool blond” pint. 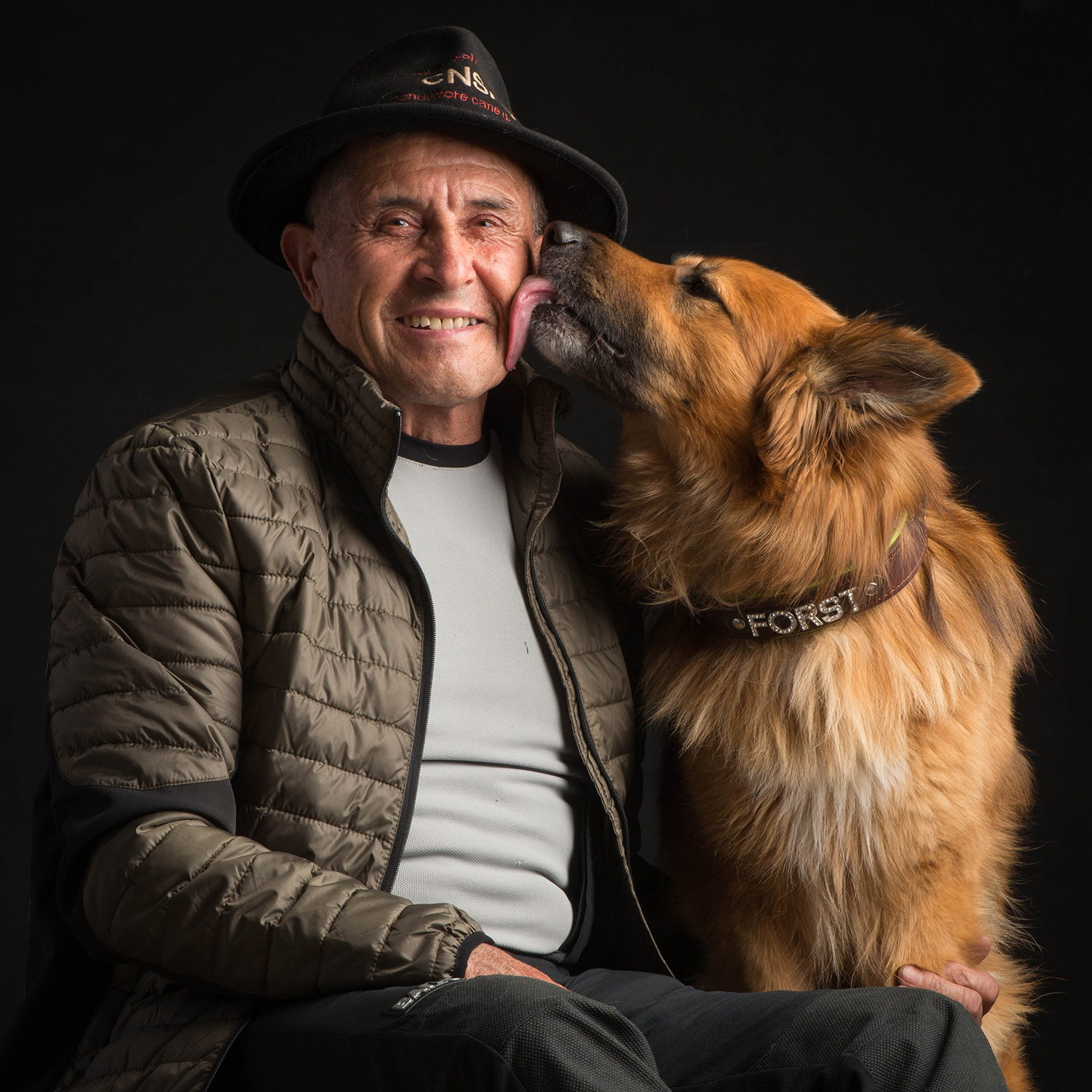 They have been man’s best friend and our most trusted and loyal companions for thousands of years: dogs. You can always count on them. Johann Castlunger (pictured) from the air and mountain rescue Aiut Alpin Dolomites is sure of this. He takes Niki, his Harzer Fuchs, on many of his rescue missions. The breed belongs to the old German herding dogs and is known and appreciated for their agility, keen perception and intelligence. Both Castlunger and Niki are always welcome guests in the Forst brewery, who has always supported the Aiut Alpin Dolomites. 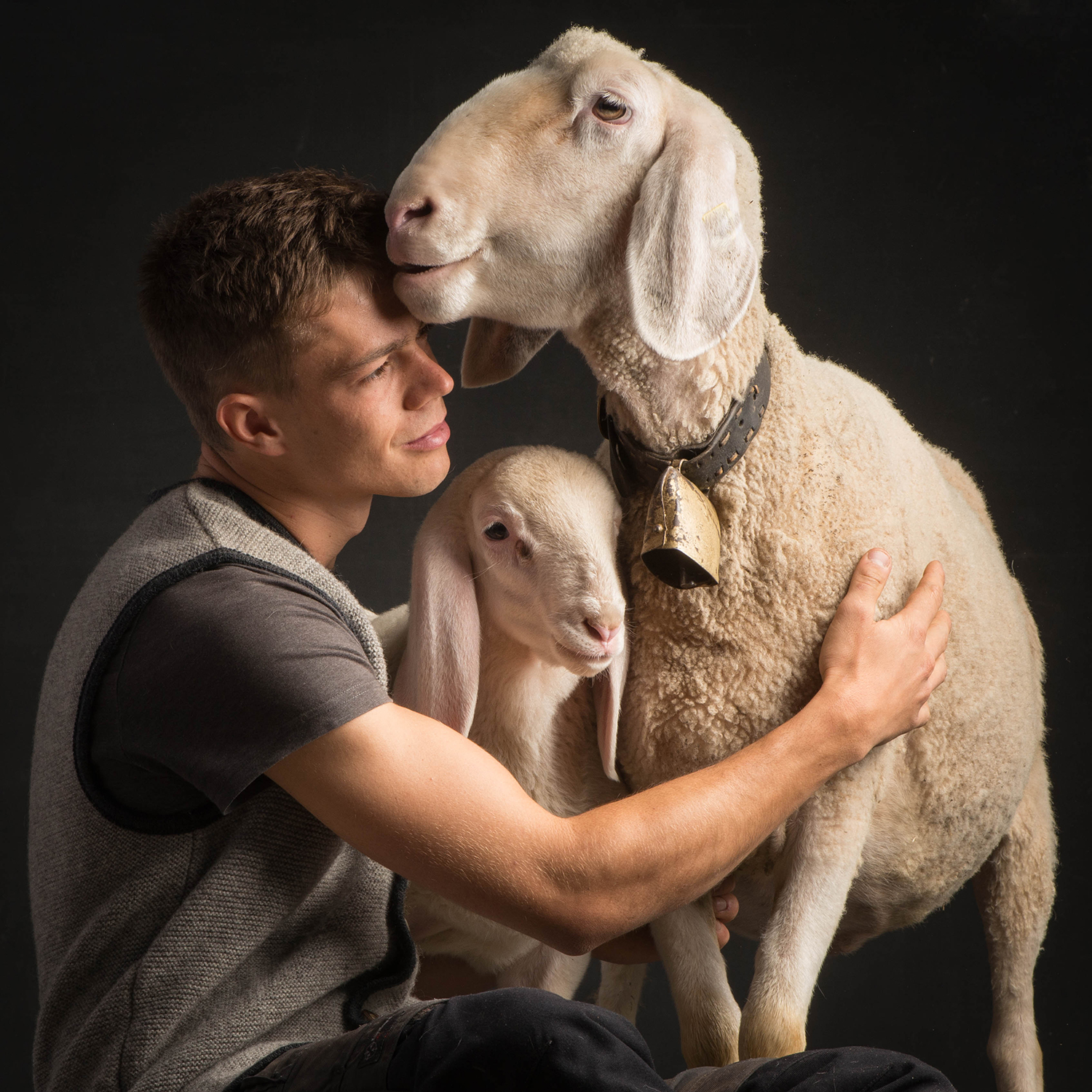 Michael Gamper is a young farmer from Lagundo. He’s sure of one thing: Working with animals, especially with his Tyrolean mountain sheep, is the perfect equalization to the fast and stressful daily grind. “You can learn so much from them. They are calm and loving. If you treat the animals right they will answer you with loads of affection.” The Tyrolean mountain sheep is a robust, frugal and simple wooled breed, that goes back to the Pecora della Roccia Tirolese and Bergamasca sheep. It has become its own breed back in the 1930s. Their long and broad ears are characteristic for this breed, as is the thin but hornless head. 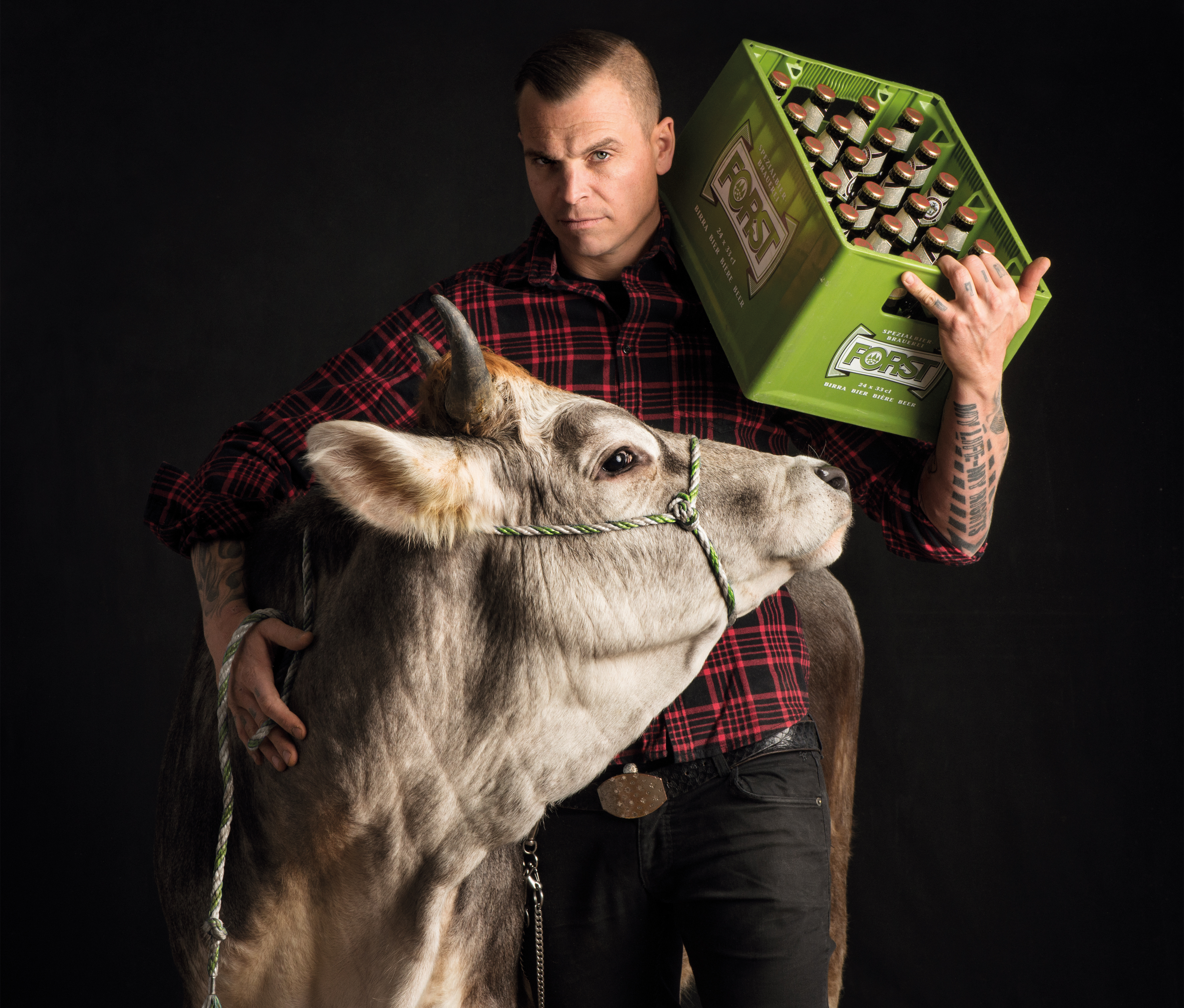 He is considered a true South Tyrolean veteran, exactly like Birra Forst: Philipp Burger, frontman of the rock group “Frei.Wild”. Recently, he decided to devote himself to farming and wants to invest more time on his homestead. “For me it is something completely new, an experience different from music, but it really takes me back to my roots. This gives me new energy, “he explains. Even as a child, he raised cows in the mountains during the summer. “Every animal has its own character, just like every human being. There are trustworthy and timid cows, but also more greedy cows (laughs). We don’t know if dedicates his songs to his cattle, but one thing is certain: dancing cows are happy cows.