He was six years old when he first stood on a snowboard. Today, Omar Visintin is one of the best boardercrossers in the world. The 31 year old is an allround talent that knows how to combine technique, freestyle and speed perfectly. The ideal requirements for a discipline in which you find yourself in a relentless pursuit, all the while riding over hills and taking sharp corners. Boardercross is no ‘fun’ activity at all. If you want to compete in this sport you need nerves of steel. Omar Visintin has cultivated these over the years: “Of course you are nervous. When you’re in a race, you don’t have a lot of time to be better than the rest. Though I have to say, I used to be way more nervous than I am today”. Stage fright before a race is still part of the deal, but he’s learned to actually enjoy it. “The heart races, the pulse is high, adrenaline is released, everything is buzzing. That can actually feel really nice, especially if the race runs smoothly and you’re the first to cross the finish line. That’s when all the excitement, the hard training and the stress finally pay off”, Visintin explains. Yet, he’s not immune to the pressure that comes with taking part in competitive sports: “You have to deliver, otherwise you’re yesterday’s news.” Thus far Visintin has been able to withstand the pressure. In the winter season 2013/2014, the 31 year old won 3rd place in the overall World Cup. Last season he stood on the podium for every second race. The result: third place in overall World Cup. He wants to be on the podium again this year and win his spot at the World Cup in Peking. “I usually take it race by race, but I definitely want to be a front runner and will put on my best fight face on to get there”, Visintin says with conviction. Competitive lingo like that is all too common in serious sports. Being an athlete is a hard job that requires a lot of discipline and is as strenuous on your nerves as it is on your body. “Sure, in the winter time I’m always more irritable and nervous. I’m under constant stress. I have, however, gotten quite good at cooling down after a race. If things don’t go well, I sometimes get angry, but I can take the hit and move on pretty quickly. Mostly that works by focussing on the next race.”

While a lot of people spend their workday in an office behind a computer screen, Visintin’s routine consists of dry practice in the fitness studio or on the slopes. Two training modules a day, fives times a week. Either alone or with his trainer and colleagues of the Italian national team. It requires a lot of self discipline and will power. “You have to constantly work on yourself, but I enjoy it. I like the life that I’m leading”, Visintin reassures us. There is also a lot of travelling on top of all this. During the World Cup season he lives out of his suitcase and flies to the most beautiful ski regions in the world. It may be France today and then Canada the following week. It sounds exciting, but it can be quite exhausting: “It takes a toll on your body, especially if you suffer from jetlag. You don’t have a lot of time to acclimatise yourself and have to bring your A game right away. Most of the time I only get to see the slopes of all these beautiful places that I visit, but sometimes I treat myself to a sightseeing tour. The race is always in the back of my mind, though …”

Neck-and-neck race in the snow 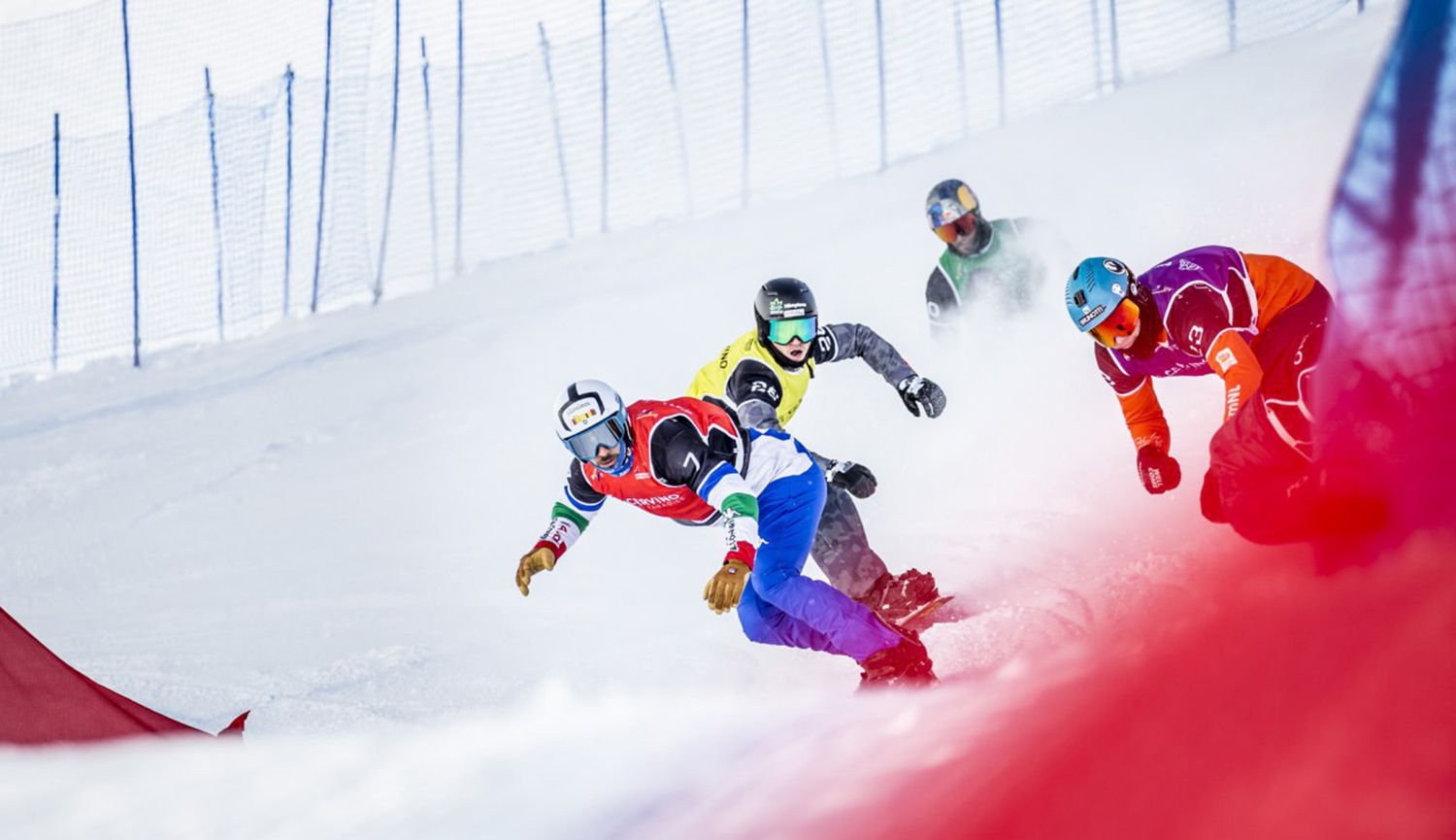 Neck-and-neck race. Or better yet: board-and-board! That’s how the wild chases on the snow usually go, and Visintin has to do his best to surpass his competitors in a thrill of speed. The parcours requires the utmost concentration. Visintin mostly relies on his instincts. “Sure, you’re surrounded by competitors in boardercross. If you’re in first place, you always run the risk of being overtaken. If you’re in the back you have to take every chance you get to surpass someone. Being in the middle isn’t easy, either. You can’t always control everything and have to make decisions within milliseconds. I’ve learned to act intuitively, it’s like a reflex to me now.” Visintin is always moving right at the limit. That can be quite dangerous. Hard crashes and injuries are a common occurrence in cross snowboarding. Visintin has always been lucky thus far. In his 10 year World Cup career he only had to renounce three races because of an injury. He broke his arm once and had a couple of concussions, but that was it.

An athletic career as a high achiever 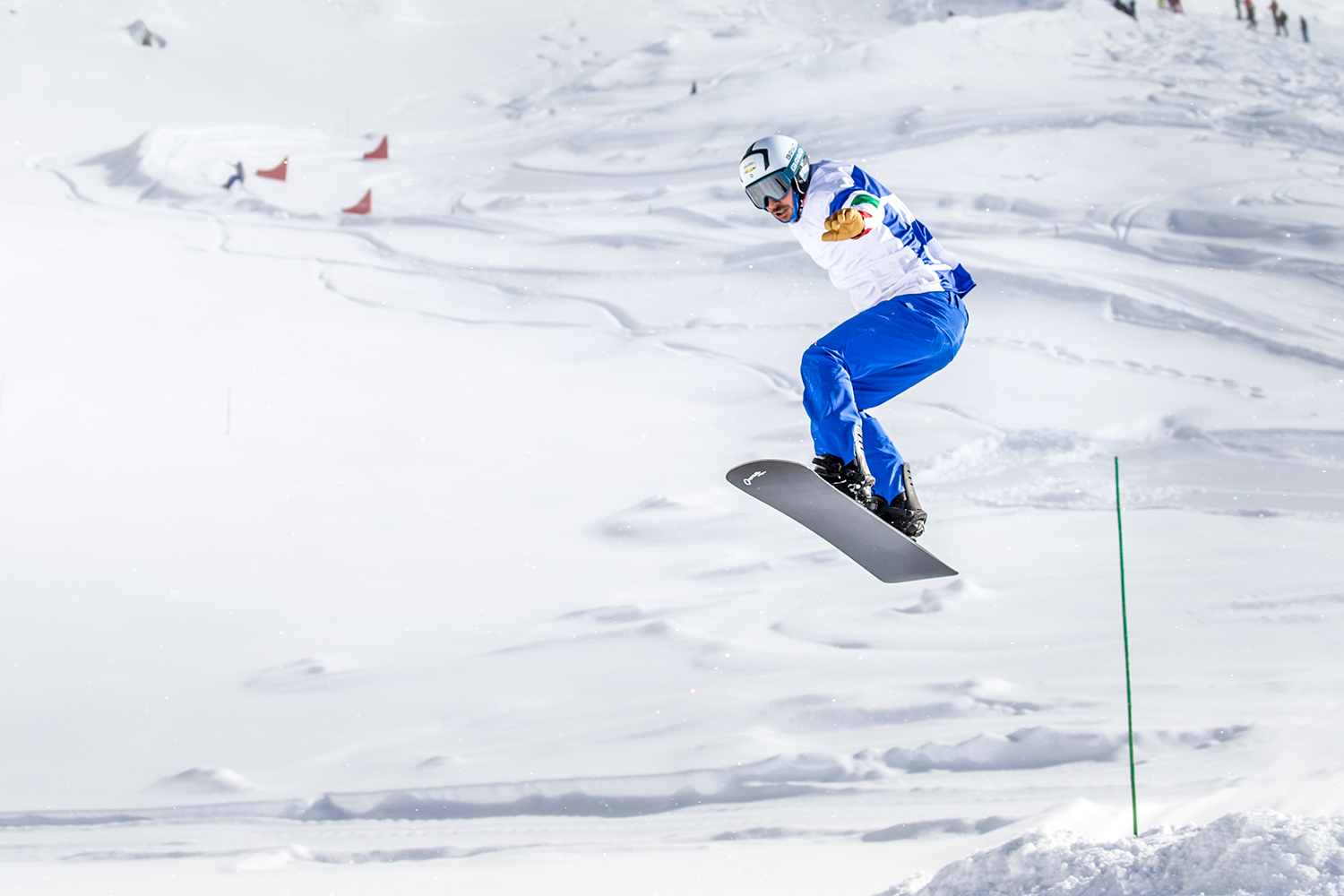 Boardercross offers its spectators exciting neck-to-neck races. Despite that, it is still overshadowed by Alpine Skiing and Biathlons. That’s where most of the sponsor deals and TV money goes. The exciting chases in the snow are especially popular with a younger audience, but boardercross still remains a niche-discipline. Visintin takes is lightly: “It’s a pity, but the sport is gaining more traction. Those who are already fans, are avid followers of the events. One thing’s for sure: It doesn’t matter if it’s a race that is broadcasted on television or not, I still have to give it my best”, he reassures us with a smirk. He speculates that this season there will be very few spectators on site, because of the Corona situation. With or without fans screaming from the sidelines, he will ‘put the pedal to the metal’. He wants to make the most of his career, which in an ideal world will last another ten years; that is, if his body doesn’t shut down or he loses the joy in competing. He’s not wasting too much time in thinking about what he will do when he’s not in competitive sports anymore. “I’d like to work with the up and coming athletes, but only after reaching my own goals. I’ll find my place somewhere, I’m sure of that.” Until then he’ll gladly take his hard earned place on the podium.