Goethe already said it 200 years ago: „You want to roam forever? See, the good lies so near“. Markus Eder only realized this in the course of his career. The pro freerider is always on the lookout for the best spots, but in time he learned to love what’s right in front of his doorstep. 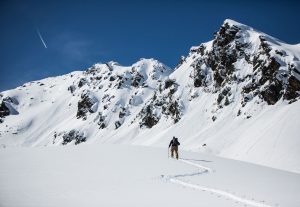 There he sits, with a big smile on his face, in front of his buddy’s house in Hossegor on the west coast of France. “We’re here to surf a little, to skate and to party!” he says with a thick accent from Valle Aurina valley. He smirks as he tells us, and his hair is scrubby while he sits there and starts to blabber. You can tell that he’s really savouring his time off, before the season starts at the end of October. Markus enjoys the “modern nomad” lifestyle that comes with being a pro-freerider. “When the season is done, I have to admit, I’m quite happy to be home for a while.” By home he doesn’t mean Brunico, where he lives, but the “Toule”, as the Valle Aurina valley is called by locals.

His calm manner seems to be a balance act. It’s not an everyday occurrence that a man heads down a steep mountain on a straight line, sometimes barely dodging crevasses and avalanches and all the while executing tricks. He’s learned to “read” the mountains, to find the best and safest line to take. Though physical fitness alone won’t get you on a podium in freeriding. It’s the year long experience and achievements he’s mastered that brought him this far.

When the training season starts, Markus likes to go to the snow parks on the Valle Aurina glaciers. He began his career as a freestyler and is now “95% freerider”, as he calculates. “I just love to do tricks while skiing, be it at the Freeride World Tour or while filming a project”.
There isn’t just one good spot for freeriding, according to Markus, but the Alps – and especially the Klausberg – do come close to being it in his opinion. “You can ski year round in the Alps. The glaciers are always open and there’s great snow parks. You can get up anywhere – and it’s affordable”. He also tells us that in countries like Canada almost everyone is a freerider and so the powder snow is already “used up” quite early in the morning. That’s why you need a helicopter or motorsled to get to the good spots.

While other people sit their days off in the office, Markus calls the mountains his workplace. To many of us that sounds like a dream come true: be outside, see the most beautiful places in the world and do what is fun for you, all the while earning good money. Markus starts to gush when he talks about his job. Still: When we ask about the daily risks he takes, he gets contemplative. The otherwise so lively freerider gets philosophical and serious: “It’s not exactly fear, it’s more, like, respect”, he confesses and halts for a moment before he continues. “If you’re scared, it’s better not to go down the mountain at all. Respect and fear are quite similar feelings, but through respect you can analyse everything that can happen. That way you can see through the entire situation way better. You go through every single step more than once, think of all of the dangers that might linger on the mountain. Fear doesn’t really let you think rationally. I have a lot of respect, and that gives me a similar adrenalin rush as fear.”

Life is full of surprises 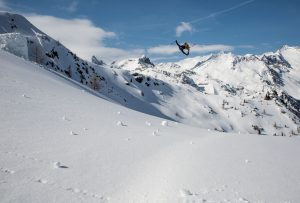 Skiing has always been the passion of the 28 year old man from the Valle Aurina. “My diversified skill set is what makes me stand out. I can do contests, freestyle, rails, backcountry kicker or big lines. I’m not a pro because of the freeriding, but for the bigger picture. I’m an allrounder, that’s what makes me special”, he tells us very self confidently.
Before he started storming peaks and swooshing down with skis, he was a classic competitive ski runner. At some point he was just sick of all the performance pressure from his coach. Markus remembers, “You constantly got the stuffing knocked out of you if you weren’t perfect.” That is why, at age 14, he just stopped. Then, through the snowboarding crew he hung out with at home, he came to freestyling.
Contests followed – and then, one day, out of the blue a surprising request that was gonna change everything came in: “In 2011 I was invited to my first freeride contest. At the time, I had no idea about powder skiing. It was the first year I ever got wide skis, the year it all started. The year of the Red Bull Linecatcher in Vars, France. I actually didn’t even wanna go. I thought: that’s where all my idols are competing, why should I run? That’s useless! Also I’ve never done powder skiing before! After that I trained a lot in the deep powder snow and felt quite fit, but still felt too insecure to really believe in myself. I ended up in the 2nd place. That’s how Red Bull found out about me. Today I feel it was all part of my destiny.” He didn’t remember the German word for ‘destiny’ anymore, as he’s fluent in freerider jargon these days. They use a lot of anglicisms, it’s just part of the scene. Newbies often don’t understand a word.

Often enough, part of being a professional athlete is feeling under pressure a lot. “Not all that glitters is gold. You constantly need new ideas and always have to do something new and interesting. Nobody shows you new ways to do things. I have to find my own paths and make decisions that I don’t feel confident about in the beginning. That’s why I put a lot of pressure on myself. I still really enjoy it tho.” (he laughs).
To Markus, having fun is essential. That’s also why he doesn’t train in the fitness studio like others, but goes out and rides his bike, goes climbing, skates or jumps on the trampoline. Physical fitness alone won’t cut it in this sport though, mental strength is an extremely important factor. “At the Freeride World Tour there are no trail runs, for example. 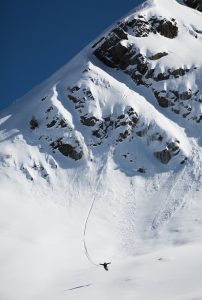 You study the mountain before and then have only one go at it. It’s easy to make mistakes then. A trick you usually complete perfectly goes wrong, because the snow conditions have been misinterpreted, or you hit a stone where you never thought to find one under your feet. The mental strain before those tours are extreme. But if all goes well, it’s an indescribable feeling.” With a slight smirk he adds in his freerider slang, that “The ups are really high up, but the downs are really down low”.
He’s still sure that he’s living his dream. “Life is really amazing right now and I hope it stays that way. You never know how long it will last. One injury is enough and your career goes down the drain. I wanna do it as long and safely as I possibly can, but yeah… Right now, it’s the dream.”
He looks to his future full of confidence. He knows exactly what he wants: “I want to go back to Mount Ushba in Georgia. I went there with two buddies a year ago and tried to do a first descent on skis, but failed. Others have done it and succeeded in the meantime, but I still want to go back.” That particular dream will still have to wait a little. Now he has to focus on the Freeride World Tour. But who knows what’s gonna be next? Markus loves being spontaneous. Fate took him on a wild road trip, and whoever met the rascal from the Valle Aurina knows exactly that he quite enjoys this “ride”. 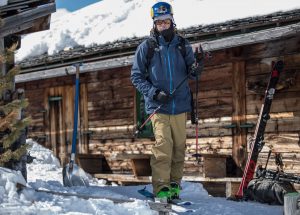 From Brunico, is a pro freerider. Amongst his biggest successes are the 1. place at the Nine Knights 2011 and a 2nd place at the Red Bull Linecatcher. These two achievements literally launched his pro career. Back in 2014 he made the 15th place at the Olympics in Sochi. In 2017 he was overall 2nd on the Freeride World Tour. Next to competing in contests, he also appears in movies, like „Days of my youth“ and „Drop everything“.