The walls are panelled with scratched old wood, the scent of things that were smoked here long ago still hangs in the air and the cat purrs blissfully on the hand embroidered pillows over on the oven bench. That oven heats the entire farmhouse in the wintertime, and right next to it stands the old table. Generation after generation sat around it in the same constellation. Everyone is highly concentrated. Sometimes a murmur is heard coming from the group, but everyone has their eyes fixed on the cards in their hands. Suddenly the cards are tossed into the middle of the table – you can hear each one hit the wooden surface with the sound of a small firework. It is starting to get louder around the table, discussions start, people tease each other. Finally, one of the four players takes the pile of cards and pushes it in front of themself. Concentrated silence rules the scene once more.

The old farmhouse parlour is a rarity these days, but safe for that, this is a very familiar scene to every South Tyrolean. We call it a “Viererwatter”, a card game that has brought people together for generations and given them exciting afternoons and evenings time and time again. It’s about spending quality time together and having a drink (or two) in good company. “Watten” has a long history and tradition in the German speaking areas of South Tyrol, Bavaria, Austria and Switzerland. You can find men and women just as oldies and children playing the game pretty much everywhere. Grandma and grandpa teach it to their grandchildren, thereby securing the next generation of “Watter”. Another interesting thing to mention, is that there are special variants and rules to the game in almost every valley and region.

The holiday Watten game in the farmhouse parlour. 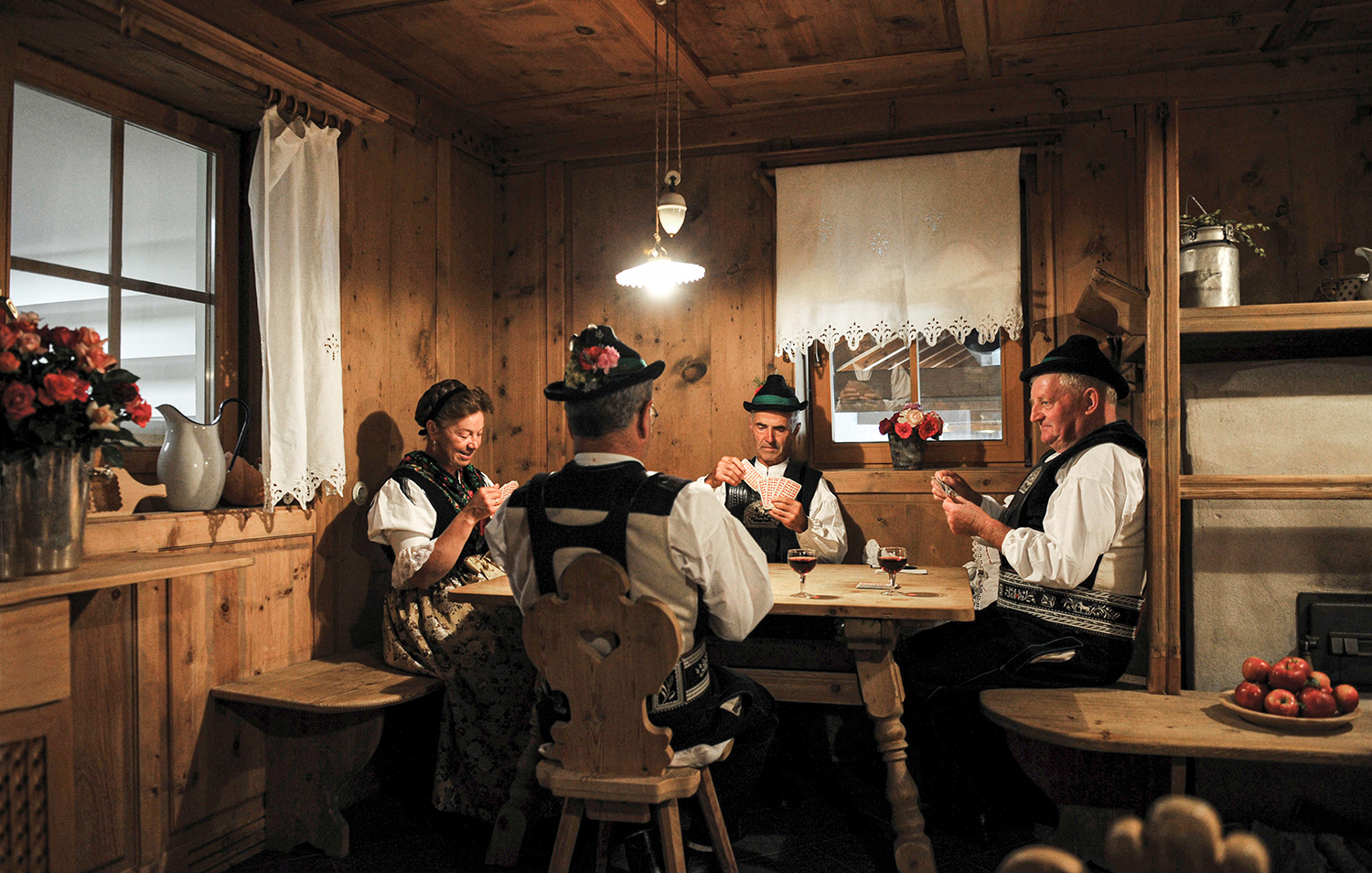 Actually, it is so much more than just a game and tradition. Once you’ve been hooked, you won’t be able to resist the fascination and the spell that the “Salzburger Blatt” (‘deck from Salzburg’) seems to cast on people. It’s similar to poker – strategic, manipulative – and players that are good judges of character and have a certain level of sneakiness are sure to always be in the lead. It’s really less about the cards you are dealt, but more about the way you play them and how you can make the best of them. You will bluff if you have to and do anything to draw out your opponent.

Now, how does one play this game that seems to have a spot in so many a South Tyrolean’s heart and has basically become part of our cultural heritage?

About the playing cards
The “Salzburger Blatt” aka “Einfache Deutschen Karten” deck (Schafkopf or William Tell pattern) are ranked in four colours of the same rank: Eichel (acorns), Laub (leaves), Schell (bells) and Herz (hearts). Every colour has eight cards with a numeric value from seven to ten and higher ranking cards Unter (lower man), Ober (higher man), König (king) and Ass (ace), which is the highest trick card. In South Tyrol, Watten is typically played with a deck of 33 cards, which is why a card called “Weli” and the six of bells (lowest ranking trick card of the bells) is also added to the deck.
The name of the game is derived from its Italian one, which is “battere” (beat, knock), the name for the Weli is also derived from Italian, where it is called “Belli” (the beautiful). 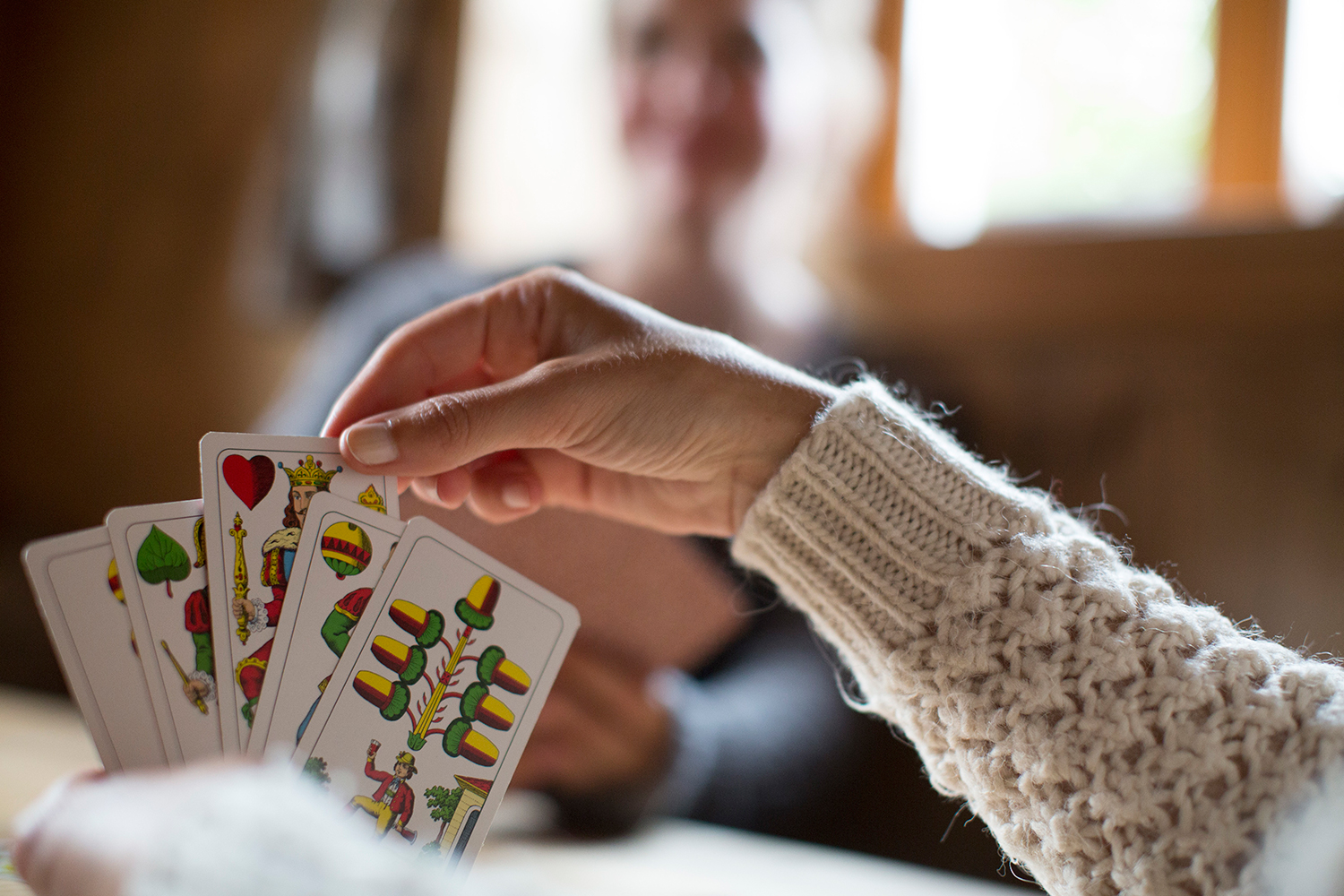 Rules of the game
The first thing you need to know is that Watten has different rules in different regions. Locus regit actus – this principle from case law means that the game is played depending on the customs of each valley, place or tavern. In case of a dispute, the host has the last word on the prevailing rules. Dealing the cards also has special rules that need to be followed in Watten. They are distributed clockwise (or vice versa): first two, then three cards or vice versa for each player. This is followed by the “Ansagen”, the announcing or calling of the cards. In the classic Watten game the forehand, meaning the player that got the first hand of cards, calls the trick card, for example “nine”. The person who dealt the cards now has to call the trump colour to fit the trick card, for example bells. The trick card in the trump colour in this example would be the nine of bells, making it the highest ranking card in the game, able to beat all other cards, save for one. It is also called “der Rechte” (‘the right one’) and can only be beaten by the “Guten/Guaten” (‘the good one’) which is ranked one point above the Rechte.

A good hand is no guarantee for a win. 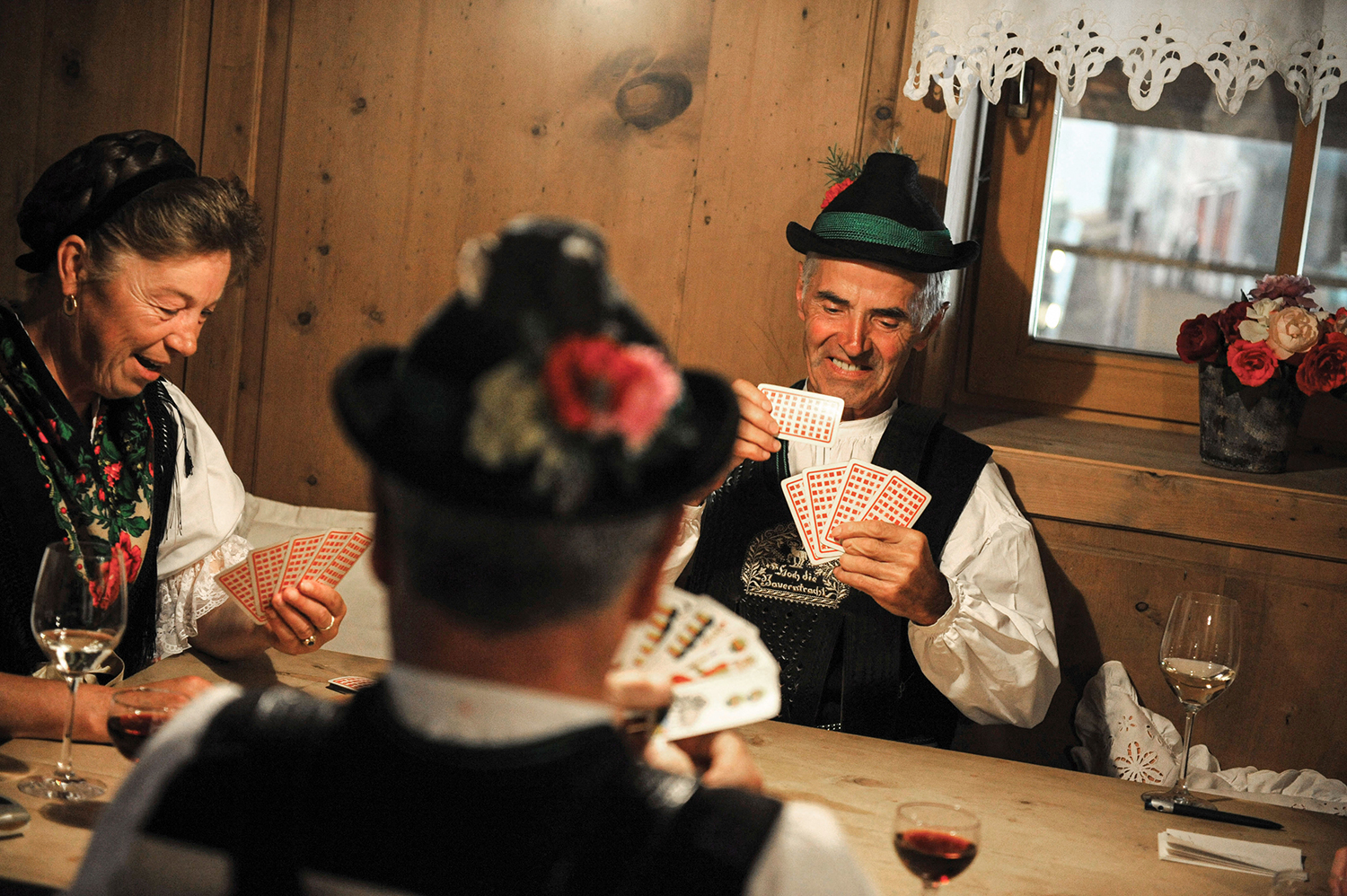 The best cards for a player couple to have is called a “aufgelegtes Spiel” (basically a ‘sure win’) and they include the Gute, the Rechte and one Blinden, making it pretty much the Royal Flush of Watten.
These days you almost never play an “open” round of Watten in South Tyrol, meaning the trick and trump cards are announced out loud for the whole table to hear (except on tournaments, like the popular “Preiswatten” where teams compete for a prize). This is different from the “Blind-Watten” or “Ladin-Watten”, where only two players know what the trick card is, including what trump colour. They are secretly exchanged between the two players after the cards are dealt and only the first point is left open for everyone to see. The rest is trial and error and lots of practice that involves plenty of fun filled moments. This variant of the game also strongly relies on your partner’s ability to connect dots, because if they are not good at that you could even lose with the best cards in hand.

The 13 commandments of “Watten” culture:

1 You are allowed to talk, gesturing is forbidden – but not everyone adheres to this rule.

2 If you are good at bluffing and bidding, you’re one step ahead.

3 The game consists of two couples who sit opposite each other across the table.

4 The goal of the game is to get three “Stiche” (‘tricks’), which earns you two points. If you make a bid you can get more.

5 If you play a game of “Blind-Watten”, you don’t say what cards are up, you play and two out of four people have to figure out what cards are being played for. The one dealing the cards chooses the trump colour and shows it only to the one calling the trick card. The other two players now must guess what the leading cards are during the game.

6 “Schönere or Schianere!” (‘better ones!’): is what you ask the dealer when you’re not happy with the cards he handed you. It is at his disclosure to give you these or refuse.

9 Whoever made the first point starts off the next round by playing the first card. In order for all players to be able to guess what cards are being played, the first round that made a point remains open on the table for everyone to see.

10 If a playing couple is sure about their win, they can make a bid of “Drei” (‘three’) points. The opponents now have to weigh their chances against them and decide to “heben” (‘hold’) their bid, or “gian” (‘pass’).

11 If the opponents pass, the round is over and the team making the bid is granted two points.

12 If the opponents hold the bid the cards will have to be played. The stakes can even be upped by bidding more and more (four, five, six points…).

13 A match is won by the pair that first reaches either 15 or 18 total points.